Vlad and I tackled one of the scenarios from the Day of the Rangers book, entitled 'Closing up Shop'. This is a scenario for Somalia 1993 but is transposes effortlessly to the modern day Democratic Republic of Zugando.

I this scenario Vlad took command of a full squad (three Fire Teams) of US marines as they attempted to drive the PRA rebels out of a neighbourhood of Churchill. Intel picked up by the CIA agent James managed to rescue in the last encounter (see Contracting Troubles AAR) has indicated that the rebels have a large cache of munitions stored in a compound in the George Street district. Due to the compounds close proximity to the UN sponsored girls school battalion command has judged it unwise to destroy it from the air, and so has tasked a marine squad to move in and destroy the munitions manually. It is expected that their will be PRA militia in the area, and that the neighbourhood will be hostile to the Americans.

Vlad has six turns to complete his mission. He will score 5 VP for destroying the cache, 4 VP's for exiting the board on turn 4, or just 2 for exiting turn 6.

As usual we played with 28mm, on a 4x4 board and doubled up the ranges of Movement and Optimum Range. 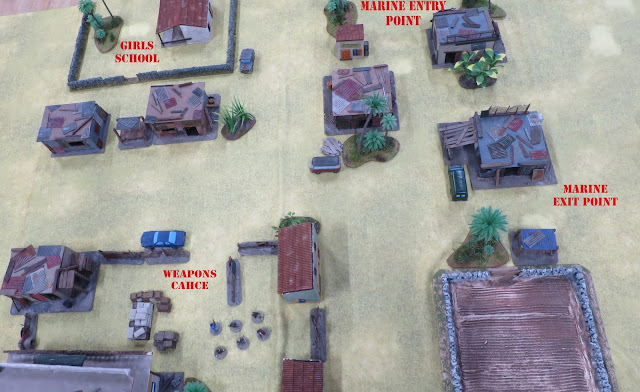 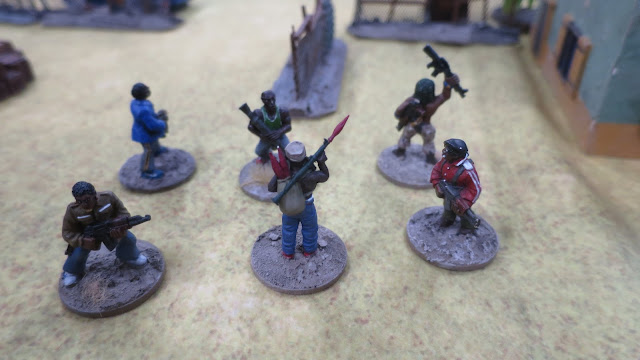 PRA guards in the compound
Vlad began by bringing his marines on through the shanty town, avoiding the main roads and maximising cover. There was little I could do to stop his advance as he was careful to avoid line of sight to my men. His men took up advantageous positions covering the compound

Unfortunately for the marines the alarm was raised and soon a large group of PRA rebels, hopped up on khat appeared. They were aggressive and even though they had no leader they were certainly up for having a pop as some Americans. 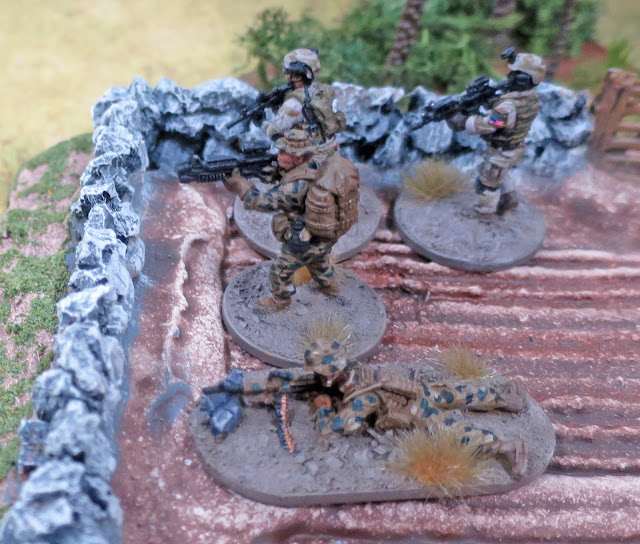 USMC take cover near the compound

The USMC took up positions in cover and fired on the newly arrived rebels, as well as those in the compound. They thinned out their opposition with discipled fire, and when the rebels managed to return fire it proved ineffective. Unfortunately for the marines the sound of their fire drew more PRA militia flooding into the neighbourhood, eager for a fight. The marines were forced to spend a second round thinning out the militia instead of assaulting the compound, and meanwhile the clock was ticking.

The end of turn three saw the arrival of a new threat- a mixed mob of unarmed but very angry Zugandan civilians intermingled with armed professional PRA gunmen. This was  particularly difficult because for the Americans who needed to avoid civilian causalities. In addition a 'technical' arrived as the result of a Fog of War Card. 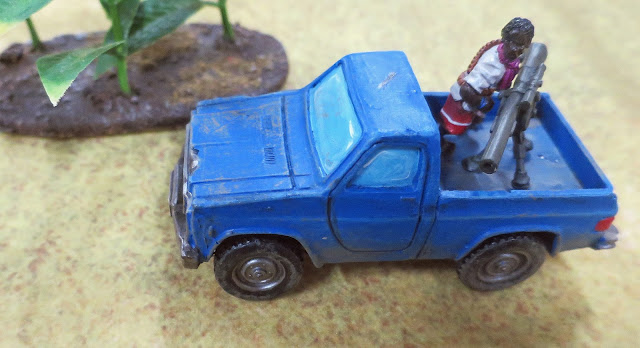 At this point Vlad made an interesting tactical choice. He ordered the marines to disengage, and withdraw off  to their exit point rather than assault the compound. This gave him 4VP, and gave the PRA 5VP. He reasoned that the extra turn he had spent driving off the reinforcements had meant that it was impossible for him to destroy the cache before turn 4, and would have been very difficult to have achieved this in time to withdraw off the board by the end of turn six (that would have gave him 7VP). The best he could have managed was to destroy the cache but not withdraw (for 5VP), and to do this he would have had to risk an aggressive assault on the compound and a close quarters battle. If two or more marines had been killed, or some of the angry civilians had been killed by the marines, then he would have lost the battle more decisively.

I think Vlad was unlucky when two large mobs of gunmen arrived at the end of turn 1 and turn 2, and very close to the PRA compound too. This cost him a turn, and his assault lost momentum. With an asymmetrical engagement the key is to keep aggressive and keep moving- the fact that the rebels were being reinforced each turn meant that if the marines got stuck in a protracted fire-fight then they are going to get bogged down by the rebels superior numbers.

Vlad's choice was interesting, as it showed the dilemmas a real commander would face on the battlefield. Some risks are worth taking, and others are not. Perhaps with an aggressive attack Vlad could have cleared the compound and destroyed the munitions cache. Certainly the PRA have been significantly weakened by the USMC attack but CQB is never without risks. As it was Vlad chose to bring his men back to barracks unscathed- a minor victory for the PRA for sure, but a good day for the marines too.

I would like to come back to this mission, perhaps with a few minor tweaks to even things out a bit.We could give the marines an extra turn to complete their mission, or some extra fire power. An other idea is to have it as a night mission with the marines in NOD gear and the Khat chewing gunmen extra sleepy (although this might throw things too far in favour of the marines).
Posted by Rob Bresnen at 08:55

What is this all about?

This Blog is dedicated to wargames in the fictitious setting of the war-torn West African nation of The Democratic Republic of Zugando.
The campaign is set in the current day, and played using Force on Force rules and 28mm figures.